HOW TO EXPORT TO GERMANY, 10 KEYS; INDUSTRIAL PRODUCTS AND SERVICES

The Hannover Messe currently hosts around 6,500 exhibitors and receives over 225,000 visitors per edition, it has become a paragon  of industrial trade shows. 60% of the exhibitors are from non-German nationalities as well as 30% of the visitors, which confirms that the fair is not only of great importance in Germany but it has also escalated at the international level. The Hannover Messe has its origins in the Hannover Export Fair, which first took place in 1947. In addition to assisting to a top industrial fair, visitors and exhibitors have; exporting to Germany amongst their main goals for the Hannover trade show.

Each year, Hannover becomes the world meeting point for industrial companies, it becomes a space for the promotion of international trade and closes its doors with approximately 5.6 million new commercial contacts. The event’s great renown and rapid growth has brought about the need to produce a Spin-off trade conference: the CeBIT, with the intention of including multiple emerging ICT sectors, and all of those related to the digitalization of business. Despite the creation of this new trade show, new sectors linking emerging technologies to the industrial sector, such as; industry 4.0, cobots, smart supply/smart factory technologies, or the artificial intelligence applied to the industry; can also be found in the Hannover Messe fairground.

The trade show’s success is not surprising, given Germany’s huge industrial capacity in conjunction with its export and import power. It’s the 3rd country in the world ranking in number of exports and imports, as well as the strongest economy in Europe.

In the context of the Hannover Messe 2018; ITC (International Team Consulting) as an International Trade Consultancy, specialized on working with SEMs and helping them extend and consolidate their sales in the German market; would like to present to you 10 keys to commercializing industrial products and services in Germany.

As you may be able to recognize by now, exporting to Germany is not an easy task. Nevertheless, our experience has shown us that following these steps; the return on the investments will be considerably higher to that of other European states.

For further information on how to export to Germany please contact: 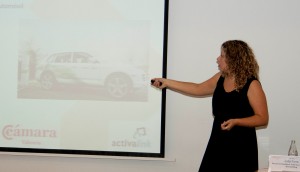 We interviewed Júlia Farré, international business consultant, after the talk she gave, at the Valencian Chamber of Commerce, on the German market and finding a business partner there.

Are there opportunities on the German market?

Yes, of course there are. Looking at the figures, you can see that Germany ranks behind France as a destination for Spanish exports. As a result o the strength of German industrial production and their thriving export trade, the country has to import components for the automotive, chemical, machine-tool and pharmaceutical industries. The high standard of living also means that they are leading consumers of Spanish foodstuffs and wine. Therefore, there are openings for both industrial and consumer goods. Many Spanish firms see it as a very mature market and very inflexible.

Even under these circumstances, there are still opportunities?

These observations are correct and breaking into the market is not easy, but there are many Spanish SMEs that are working in and have consolidated a market there by fitting into the market, adapting their products and processes to meet the service and logistical expectations of German companies. A certain cultural sensitivity is also necessary and speaking German is a very big plus.

What are the main obstacles?

It is a demanding and exacting market in which precision and coherence are the order of the day, exceptions are most definitely frowned upon.

As a businessman, why should I export to Germany?

The short answer is that as the locomotive of Europe you should be there. Precisely because it is a demanding market, however, once established sales are regular and grow steadily. The country is politically and economically stable, export and work practices are similar to Spain in such questions as terms of payment, logistics, and currency, amongst others.

Why has the German economy weathered the crisis so well?

The Germans entrusted their economical model to exports and technological innovation several decades ago. Just to compare two regions with similar populations and industries, Catalunya and Bavaria, the latter exports three times as much as Catalunya. Despite a certain amount of relocating production to cheaper countries, Germany continues producing and purchasing. They also maintain very good relations with all the neighbouring countries, both in East and West Europe.

Do Spanish products still suffer from an image of low quality and rejection?

It’s true that, 20 years ago, Spain was regarded as an unreliable country. Nowadays, this has, to a large extent, changed. All Spanish industry has to do is adapt to the country and demonstrate that their worth, quality and service is the same as that of any other European manufacturer. From here on, it’s up to you.

How is this affected by the current economical climate?

Some of our German clients have told us that, after listening to the news that reaches them, they imagined they were going to arrive in a country with empty bars and the shops boarded up and are pleasantly surprised to see the restaurants still full. However, they do know that the situation here is complicated and that a knock-on effect has negative results for them too. There has been a natural increase in skepticism, but I do not feel that this will prove to be a disaster. Quite the contrary, exports to Germany increase year on year. Companies here should redouble their efforts to allay pre-conceived ideas about the country.